The Fishing Cat Press (Dublin, Ireland) is delighted to announce the publication of Kenneth White’s Eyes Wide Open on the haiku path, featuring eight of his essays on the way of haiku and a choice of his haiku, ranging over Europe, America and Asia, selected by the author.

Kenneth White, who has long enjoyed an extra-ordinary reputation as a highly influential author at the forefront of modern literature, has decided to gather together all his writings on haiku, a path he has long trodden and explored throughout his poetry, essays and ‘waybooks’.

White drew attention to haiku as early as his first book and later acknowledged Matsuo Bashō as a ‘great companion’ and a contributing factor in the elaboration of the theory-practice he invented and named Geopoetics, more and more seen as of the highest relevance in the current world context.

(Click here for more information on Kenneth White and Geopoetics) 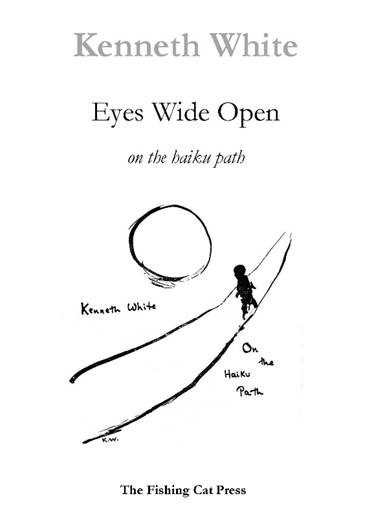 Price for Eyes Wide Open: €15 per copy (plus postage fee).

Orders should be sent by email to thefishingcatpress@gmail.com (and copy to haikuspirit@haikuspirit.org) specifying the number of copies, full name and postal address as well as the email address associated to PayPal account. A confirmation email will be sent and then a PayPal invoice.

Preferred mode of payment: PayPal. Please enquire by email for other modes of payments.

seashores
an international journal to share the spirit of haiku

The objective of seashores is to share haiku from all over the world and explore how the way and the spirit of haiku, with its power to connect us to nature and our world can play a role in poetry and our lives in general.

Click here for more information on this journal and submissions

from various horizons, sometimes for the first time in English.

STONE AFTER STONE, an anthology of haiku by members of Haiku Ireland

Because of A Seagull / A Cause d'une Mouette

A Collection of Haiku by Gilles Fabre